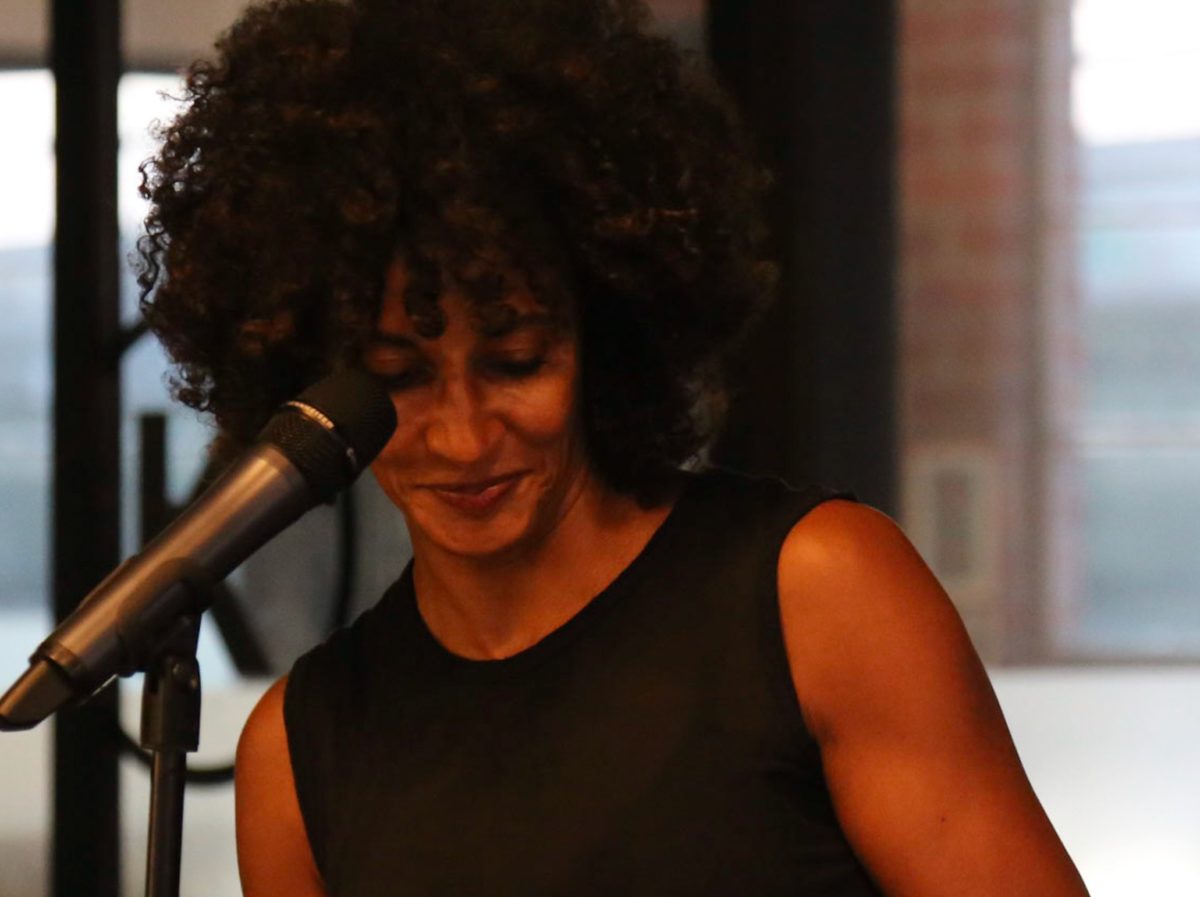 You don't always have to believe in something for it to work
by Laura Cathcart Robbins | 11.29.18

I stare at my feet while unshed tears burn in my eyes. I brace myself as another wave of shame washes up over me.

I’m in a fucking Alcoholics Anonymous meeting. I’m in the middle of a divorce. I’m a failure. I’m a mom for God’s sake! I’m a soon-to-be-divorced, failure of a mom in an A.A. meeting.

A man who looks something like the Quaker Oats guy is reading out of The Big Book now. I try to look as if I’m interested in what he’s saying to draw less attention to myself, but I fear that I’ve already been spotted as a “newcomer” by a dark-haired woman who looks like Rosanne Barr.

It wasn’t like I didn’t already stand out, as soon as I walked in. All of these white men and women started smiling at me like I was the prize in a box of Cracker Jack. One offered me a seat, which I declined because it was in the front of the room.

No way the only black person here, fresh out of rehab, is sitting in the front row, y’all. Sorry.

I find that I’m unable to make eye connect with anyone, so I sit in a seat near the back door so I’m ready to slip out the moment I’m sure I won’t be followed by one of these “joiners.” He’s still reading, but all I hear is a lot of “Thee, Faith, and Thy,” and other words that sound like they’re right out of the Bible.

Rosanne Barr keeps nodding with the Quaker Oats man and then looking at me as though she wants me to join in. Ignoring her, I keep my eyes steady on him. I stay like that until he finishes and the room bursts into applause. Now, some trembling, slip of a blond girl is reading what sounds like a list of rules, while this tall guy with a crew cut passes a basket down the first row. People keep their eyes on the blond girl while they fish around in their wallets and purses for dollar bills.

Rehab had been the break I needed to clear my head, get all of that shit out of my system—but I didn’t feel any stronger than when I checked myself in 40 days earlier. I needed something else and everybody—the counselors, my therapist, my family, my friends— told me that this was it. Alcoholics Anonymous was the solution.

I know this isn’t doing anything to keep me from drinking, but I don’t know what else to do.

I will never have what they have.

On October 10, 2008, day 63 of my sobriety, I show up late, as usual and take a seat in the back of the room. By now everyone seems to know not to try and speak to me, but I know some of the faces and some of their names. They say their names every time they speak, and these muthafuckers really do like to hear themselves talk. A guy named David smiles at me and points to the leader.

“Have you heard her? She’s amazing.”

I smile politely and nod, accepting his assessment of the 50ish, short-haired, white woman at the podium. I look around the room: My daily inventory-taking of everyone.

Don’t these people have anything better to do than to show up here all smiley and happy every day? Don’t they have jobs?

But my reverie is interrupted when I hear the leader say the words, “I was a Parent Association president and I was failing everyone who loved me.”

I look up sharply at her, my eyes widening with sudden curiosity.

The fact that I was last year’s PA president at my son’s school is one of my biggest sources of shame. People admired me, respected me, trusted me. What if they found that this perfect parent they had selected to represent their school was a nothing but a drug addict, a drunk? How would I ever show my face there again? How I survive if anyone knew how bad it had gotten?

None of them seemed shocked or judgmental.

And yet, here she is, in a chocolate-brown, fitted dress from Donna Karan’s fall line and matching suede knee-high boots. I realize something that I’ve never felt before in an A.A. meeting.

I want what she has.

Not the dress or the boots (although, I really do like those boots), but the absolute sense of calm she seems to have as she shares about taking pills in her closet and hiding bottles from her husband. She shares this all with an apparent absence of guilt, shame, or anxiety. She makes eye contact with people as she talks. None of them seemed shocked or judgmental. They all nod along with her as if she were telling them a bedtime story.

She seems so easy in her skin.

I find myself staying to the end of the meeting for the first time and then waiting in line with the rest of them to thank the speaker.

When it’s my turn, I tell her my name, ask her to sponsor me and then burst into tears.

The next three or four months are a blur.

My divorce becomes final, I’m falling in love a man that I met in rehab (yes, rehab), I’m re-establishing myself in my kids’ lives and meeting my sponsor, her name is Zoe, at a meeting every day. She sponsors five or six other women, too,  and we all meet once a month and go through the basic text of A.A., The Big Book. They’re all white, and most of them younger than me. I try my best to connect to the flowery, scripture-like verbiage (actually, I don’t try my best —but I try), but I am still left feeling as though they are all sitting around a warm fire under cozy blankets and I am outside in the cold, peering in through a window.

Nine months into my sobriety, Zoe sits me down and tells me she’s worried about me, as I’m not practicing the eleventh step of the program: prayer and meditation. At first, I’m angry because I’m fucking doing everything else she’s asked me to do. And of all the women she sponsors, sometimes it seems like I’m the only one who follows her suggestions. But now she’s worried about me?

I tell her that I just don’t believe in God and have no intention of trying to make “conscious contact” with something that I don’t believe exists.

What she tells me next changes everything for me in an instant.

“You mean I just do it—even though I don’t believe it?”

“And that’s gonna make some kind of difference?”

So, I do. Every morning for the next few weeks feeling self-conscious AF, I close my eyes for one-minute and try to clear my head, then I utter a silent prayer that goes something like, “Please help me stay sober.”

Each week, I picture myself going back to Zoe at the end of the month and telling her, “See! It doesn’t work.”

When I celebrate my one year with a cake (as is the custom in my home group), I share about my resistance to prayer and meditation and how I don’t believe in their God. I sit down quickly afterward, expecting to be met with disapproving looks and terse words, but instead, that little slip of a blond girl, the one from the first meeting, comes over and sits next to me. She introduces herself as Lisa and thanks me for my share.

Then, to my complete surprise, she asks me to sponsor her. I laugh a little and apologize quickly once I see the look on her face.

“I’m sorry, it’s not you. It’s only because I just stood up there said how hard it is for me to connect to this program and then you asked me to take you through its steps.”

I hadn’t really noticed her eyes before, they are a brilliant blue, like tide pools in the summer, and right now they are fastened directly on to mine.

“But that’s why I asked you,” she says. “You don’t believe either and you have a whole year. I can’t seem to put together more than 60 days.”

In July of the following year, I walk into the meeting carrying a bouquet of lilac and blue hydrangeas, Lisa’s favorite flowers. The Quaker Oats guy (whose name is actually Sam) gives me a big hug and tells me that he’s saved us seats in front. Rosanne’s doppelgänger is already in the chair next to mine.

“Hey Susan,” I smile. She gives me a kiss on the cheek.

Lisa asks me and Gary (the crew-cut guy) to present her with her one-year cake. Afterward, when she shares from the podium, she thanks me for not insisting that there is only one way to get well, for showing her that there is more than one way to believe.

My eyes are teary as I watch her, and I am filled with a sudden, unexpected wellspring of gratitude.

Even still, you’ll find me in an A.A. meeting almost every day.

One of the lines in Marvin Gaye’s song, “Flying High in The Friendly Skies,” a haunting, beautiful ballad about his addiction to heroin, sums up for me how imprisoned I felt when I came into recovery 10 years ago. “Ohhhh, I’m hooked my friend, to the boy who makes slaves out of men…”

I still don’t believe in a Judeo/Christian God, I still have to talk myself through my daily prayers and meditations, I still bristle at the gendered, Christian language in the A.A. literature. Even still, I’ve stayed. Even still, I sponsor several women. Even still, you’ll find me in an A.A. meeting almost every day. Even still, I’ve started a meeting of my own with my best friend (whom I met in A.A.) and that guy from rehab, who is now my live-in boyfriend, and I host a book study in our home every Saturday.

Sometimes, I feel like one of those Looney Tunes characters who keep going after they run off of a cliff. Nothing’s really keeping them aloft, but they don’t actually fall until they look down.

I don’t know exactly what’s keeping me sober, but I’m certainly not trying to look down and find out that there isn’t anything there. “If it ain’t broke don’t fix it” is at times, a deeply flawed philosophy, but when it comes to my recovery, I’m finding that it’s the one thing in which I can honestly say that I have faith.

“Just Do It” is more than the NIKE campaign to me, those words, given to me by my dear, late sponsor Zoe, are the keys to my freedom. 11 Ways to Turn Down a Drink