Photo by Ahmad Dirini on Unsplash

Cannabis, Psychedelics & Recovery: It Isn’t As Binary As You Might Think

The complexity of substance use disorder, trauma, and using alternative modes of recovery
by Olivia Pennelle | 8.12.19

Editor’s note: The Temper and its parent company, Tempest, are not recommending the use of cannabis, CBD, or psychedelics as part of sobriety. This piece is meant to reflect one writer’s experience and exploration of a growing trend in the recovery community.

If you’re in recovery and use substances like cannabis, CBD, and psychedelics, it’s highly likely you’ll catch some serious flak from the recovery community.

Unfortunately, this stigma reflects the binary perspective that if you’re not abstinent, you’re not in recovery. This binary doesn’t take into account whether you’re using these substances to achieve or maintain a state of recovery or to manage co-occurring disorders and health conditions, from depression to chronic pain and cancer.

But the reality isn’t that binary.

Recovery isn’t dependent on abstaining from every substance. The goal of recovery is to release ourselves from harmful behaviors that strip us of our self-respect, dignity, and purpose in life. Recovery is about taking care of our health and well-being, and it is an entirely personal choice of how we achieve those goals.

The goal of recovery is to release ourselves from harmful behaviors that strip us of our self-respect, dignity, and purpose in life.

The issue here is the misconception that taking substances serves to avoid that healing and assumes we are still seeking an escape. But the contrary has been found to be true.

People in recovery do use substances.

Many of us know someone in long-term recovery who uses medical marijuana (depending on if it’s legal in their state) — they just don’t publicly admit it out of fear of being reprimanded by their community. Recovery purists claim that you can’t be in recovery if you use anything mind-altering. Of course, that judgment excludes tobacco, highly caffeinated drinks, sugar, processed foods; all substances that, ironically, alter your state of mind.

I’ll never forget an exchange with an old-timer in my first few weeks of recovery. He told me that he refused to sponsor anyone taking antidepressants because it prevented a spiritual experience.

The 12-step community is rife with this kind of harmful absolutism, which overlooks the medicinal benefits that the person might be getting from using a substance that has been used for centuries to heal a number of ailments. Neither does it acknowledge that Bill W., the founder of Alcoholics Anonymous, used LSD and touted its benefits.

Bill believed that LSD could help those with alcohol use disorder achieve a spiritual awakening by helping them gain insight into their condition in order to find their road to recovery.

Neither does it acknowledge that Bill W., the founder of Alcoholics Anonymous, used LSD and touted its benefits.

There is an increasing prevalence of 12-steppers using psychedelics and cannabis — there is even a 12-step group for people who use Psychedelics in Recovery. Taryn Strong of SHE RECOVERS recently opened up about her use of ayahuasca as part of her recovery, stating that she attended her first ceremony in March and will be incorporating plant medicines into her patchwork of recovery. Plus, world-renowned addictions specialist Dr. Gabor Maté is in favor of this treatment and now hosts ayahuasca retreats.

The increase in the use of these drugs isn’t necessarily correlated to their legalization, however, as most of them — with the exception of cannabis — remain classified. Although, the FDA has recently licensed a number of labs to produce high-quality hallucinogens for experimental purposes.

Medicinal uses of cannabis and psychedelics

Many doctors prescribe both cannabis and psychedelics for an array of health conditions, such as helping patients overcome substance use disorders, facilitate withdrawal, manage chronic pain, and treat mental health disorders like depression. There is a substantial body of evidence to support the medicinal benefits.

Why are psychedelics so popular? Well, as Bill W. said, they allow the user to experience a greater insight into the self. Rick Doblin, the founder of the nonprofit Multidisciplinary Association for Psychedelic Studies, which funds pilot studies about the use of psychedelics in medical settings, says: “Addiction involves past material, a lot of denials and running away. Psychedelics bring the material to the surface in ways where people need to surrender to them; it’s hard to hide from yourself under [them].”

My experience of CBD for the treatment of complex PTSD

As a journalist, I’ve experienced a significant shift in my perspective of what recovery looks like, and that is now through a lens of harm reduction and individualism. It is not my right to tell someone or comment upon how they recover — that is their business.

For the first five years of my recovery, I recovered in 12-step fellowships. I was told repeatedly that the only pathway to sustained recovery was the 12 steps, God, and complete abstinence. I left over two years ago. Since then I developed a pathway of recovery that doesn’t include God, and I have remained abstinent because it is the right decision for me. It wasn’t easy, though.

During the last two and a half years since leaving AA, I started intensive psychotherapy. As hard as it is, therapy helped provide significant relief from the stresses of a life in recovery and a safe space in which to process my trauma with a trained professional. It was only through opening up that we discovered I suffer from complex PTSD. My idea of normal was heavy dysregulation, hypervigilance, and the perspective that I was simply a highly sensitive, anxious individual.

As part of my recovery from trauma, I began using CBD. It changed how my body responds to triggers.

What has been most frustrating about that diagnosis was that I spent five long years surviving in 12-step fellowships with the belief that I was broken and defective, and the only way I could be saved was surrendering my will to God while sitting in a church basement three times a week for the rest of my life!

The answers I received about my symptoms of dysregulation — depression, desire for intimacy and connection, food, fear, anxiety — was simply to get to another meeting, do more step work, help others, and keep surrendering. But for me, the pathway to recovering from trauma is developing agency, autonomy, and building self-esteem; What feels like to be the antithesis of 12-step recovery.

As part of my recovery from trauma, I began using CBD. It changed how my body responds to triggers. It calms my nervous system, like three hours of yin yoga, in just 15 minutes. It’s now a fundamental tool that I use in my trauma recovery.

The complexity of substance use disorder and trauma

The sheer complexity of substance use disorder today means that we can no longer have a binary perspective on what someone should do to overcome it. Many of our histories are steeped in early childhood trauma, which cannot be solved just with a spiritual approach.

The Adverse Childhood Experience (ACE) study — measuring the effects of abuse, neglect, substance misuse, loss, abandonment, and humiliation — shows us the profound impact these adverse experiences can have on health outcomes in later life. For instance, those with a score of four ACEs or higher are seven times more likely to develop alcohol use disorder, and a male with a score of 6 or more has a 46-fold increase in the likelihood of becoming an IV drug user. At least 64 percent of the population has at least one ACE, and 12 percent have a score of four or more.

Dr. Maté believes that addiction is rooted in an attempt to escape these adverse experiences. He often asks, “The question is not why the addiction, but why the pain.”

I asked Dr. Jamie Marich, a counselor, trauma specialist, and author of several books on trauma, about the impact of trauma on the brain and how we achieve healing. She told me:

“Our understanding of trauma’s impact on the brain and the human experience is ever-expanding. Trauma is an unhealed wound — physical, emotional, sexual or spiritual — that causes a high degree of limbic level activation if left unhealed or unprocessed. We cannot heal our limbic brains by words alone because the limbic brain has nothing to do with words or rational time. Yet high levels of such activation can translate to distress at the level of the body. This is why many individuals with unhealed trauma find drugs, alcohol, and other pleasurable activities appealing, and this is the major reason for the connection between unhealed trauma and addiction.”

Asked about the role of psychedelics in healing, Marich says, “I always get concerned that survivors of trauma in recovery can become attached to the idea of a simple ‘Can I just take something?’ fix to bring about healing. However, as a field, we must become more open-minded to the idea that there are many different ways to alleviate suffering. Some of these paths that involve psychedelics may ignite the possibility of a larger solution to healing for people.”

It goes without saying that plant medicines, cannabis, and other psychedelics are not for everyone. As Taryn Strong stated, she is not advocating for the use of those medicines; rather, she was sharing her journey of healing. Aware of the potential criticism, she said, “If you are feeling any judgments about this, I understand. I believe those judgments come from the fear of the unknown — and I had the same fears when I first heard about it (prior to doing my research).”

She concludes, “I’ll end this with words from Dr. Gabor Maté: “[Ayahuasca] is far from being a recreational psychedelic ingested for escapist purposes. In its proper ceremonial setting, under compassionate and experienced guidance, the plant — or, as tradition has it, the spirit of the plant — puts people in touch with their repressed pain and trauma, the very factors that drive all dysfunctional behaviors. Consciously experiencing our primal pain loosens its hold on us.” 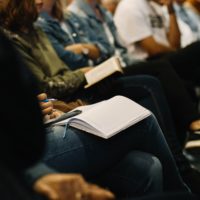 How to Successfully Leave 12-Step Meetings

How to Date Online if You’re Sober

3 Women in Recovery Explain How Diet Culture Impacts Their Lives

4 Women on the Benefits of Dry January