4 Lessons Women Taught Me About Managing Emotions in Sobriety

Learning to live with life's ups and downs in recovery isn't easy.
by Nicole Slaughter Graham | 2.13.20

I fondly remember celebrating my first year of sobriety. I sat at a restaurant at a long, rectangular table with several other sober women. These women walked me through learning how to live without alcohol and now they sat alongside me, celebrating this milestone with me. It was one of the first times I’d felt genuinely supported and loved by a group of women.

As we ate and talked and laughed, one of my friends leaned over to me.

“Congratulations,” she said with a smile. I smiled back. “Now, the real work begins.” I can remember my smile turning into a look of confusion. The real work? I thought incredulously. Uh, I’m pretty sure these last 365 days were real, hard, terrifying work.

And it was. Leaving alcohol behind was one of the scariest things I’d ever done. I had to relearn how to do everything — going out, having dinner, getting together with friends, parenting — without alcohol. I didn’t know if I could do it, honestly. But I did. And that was an accomplishment.

At that time, I had no idea what my friend was referring to, but today with a few years of sober living under my belt, I get it. Putting down the alcohol set the stage for a happy, healthy, productive, and satisfying life. But that was it. It set a foundation but creating a life that I wanted to live was going to take more than just putting the physical substance down. A big part of building a life I wanted to live was learning how to acknowledge, manage, and work through the emotions I’d been running from (sometimes called emotional sobriety). This is what my friend was referring to.

Putting down alcohol is great but if you’re still bat-sh*t crazy, what’s the point in being sober? So when I was clear-headed and able to learn after that first year of sobriety, those same women that sat around that table with me taught me a few things about managing emotions. Here’s what I learned.

My knee-jerk reaction when someone makes me angry or hurts me is to retaliate. Whether that be firing off an angry email or making a rash decision based on my emotions, acting before I’m in a stable emotional state generally gets me in more trouble than it’s worth. I’m also a crier, which is infinitely annoying at times.

I learned “the pause” early on in sobriety. Rather than furiously type out that text message or yell at the person in front of me, I now take three to five deep breaths. Or I walk around outside a bit. Or I make some tea and sit at my table and enjoy that whole cup of tea first. I’ve learned not to act in the arc of emotion but rather to wait until I can think clearly. Sometimes, that takes five minutes and sometimes it takes five days. But the result is always better than acting at the moment.

2. Sit in the discomfort.

When I was drinking, feelings that were uncomfortable like sadness, anger, guilt, or regret, were the feelings I tried to drown out with alcohol. I didn’t want to have to experience those feelings. I wanted to run from them or stuff them away in some box under my bed.

Women in sobriety taught me that sitting in the discomfort — sitting in that feeling and really figuring out how it manifests in my body physically and mentally — releases some of its power. Today, I meditate on how what I’m feeling manifests in my physical body. I simply go into the public bathroom or my bedroom or my car, close my eyes, and pay attention. Is my heart racing? Do I feel hot or am I a little light-headed? I get curious about how my emotions affect my physiology, which gets me more focused on the body, releasing the mind a bit.

This is a popular saying thrown out in 12-step groups and rehabs, and for good reason. When I first heard this, it actually made me a little angry. Uh, how does one focus on “one day at a time” when there’s so much that needs to be accomplished in the near future?

I have high-functioning Generalized Anxiety Disorder (GAD), which means thinking about (and subsequently worrying about) the future is my literal superpower. But if I’m honest with myself, it doesn’t serve me.

My husband and I had just closed on our first house about two weeks before we found out he was going to be laid off from his job. I went into instant panic mode and called a woman in sobriety. She kept repeating, “One day at a time, Nicole,” and I kept fighting her on it. Helloooooo, we just bought a house and now we’re down to one income! And then she said, “Okay when one day at a time is too much, you focus on one hour at a time or one minute at a time.”

The statement stopped me in my tracks but I didn’t know what to do with it. She made it tangible for me by asking what I needed to be doing for the next 20 minutes. I was at work and had walked out of the office to call her. “I need to go back into the office and finish this report up,” I said. That, she said, was taking it one minute at a time. So that’s what I did. In those situations that seem so deeply overwhelming, focus on the next task at hand. And then when that’s done, figure out and focus on the next task. And keep that going until you don’t need to anymore.

The truth is that anger, sadness, and even our joy… it’s all finite. It won’t last. That was hard for me to accept. Why on earth would someone tell me my joy wasn’t going to last?

It was true though, and I didn’t understand the value in that little phrase until I needed it. I was riding a multi-year wave of highs. My career was going well. My family life was going well. My finances were stellar and my mental health was doing great. And then it all came crashing down. I had a second child, got laid off, and suffered through 13 months of postpartum depression. It was at that time that those three words hit home. Our lives are made up of a million seasons. I was in a hard one, but it would, at some point, pass.

And that made it bearable on the days that I thought I couldn’t take anymore.

Sobriety is not just life without a drink or a drug. Life has its twists and turns, creating chaos one moment and happiness the next.

Thankfully, there’s so much more to sobriety than simply removing a substance from our lives. Life is beautiful and painful and crazy and hard. But with a community of sober women around us, we can learn how to live through it all. 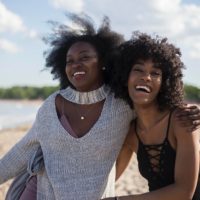