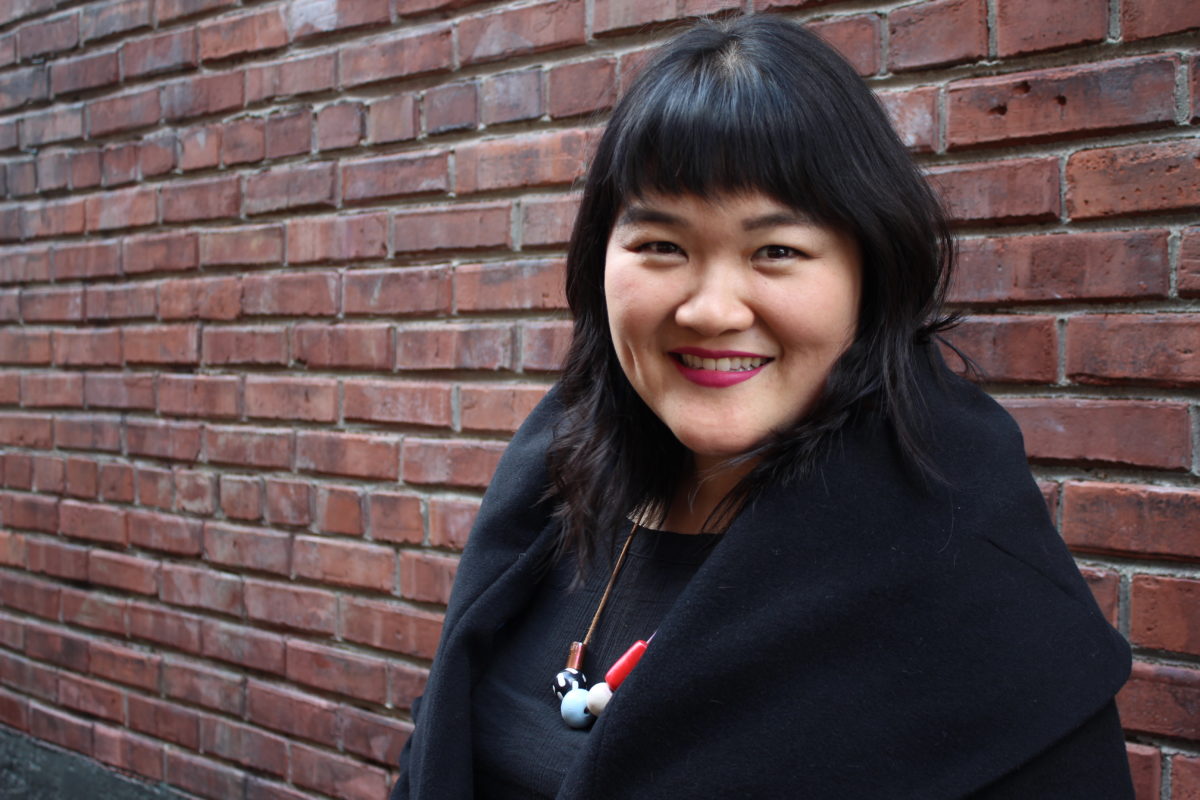 These Powerful Women of Color are Destigmatizing Mental Illness

One of my scariest childhood memories is of my mother shaking my little brother and I awake in the wee hours to rush to a police station. We were there to retrieve my father who was sitting in a metal chair, hands handcuffed behind his back, head lolling. He was completely drenched and entirely without his faculties. In South Korea, where my family was living at the time, this was common police practice for the publicly intoxicated. There was no coffee or even a cramped cell in which to sober up until morning. They simply doused those under the heavy influence of alcohol with a bucket of cold water to shock them into temporary coherence.

I have been medically advised to avoid alcohol since before legal drinking age because I was diagnosed with bipolar disorder at age 20. Alcohol can exaggerate symptoms of mania and depression, plus may have dangerous interactions with my medication. Though my diagnosis was received in the midst of my college years, I never found alcohol too tempting. For me, this is no doubt in part due to my early memories of witnessing what alcohol can do.

But I am one of the lucky ones.

Alcohol can exaggerate symptoms of mania and depression, plus may have dangerous interactions with my medication.

Nevertheless, of the nearly 44 million adults who live with a mental health condition in the US, there are millions living well and in remission whose stories remain largely untold. Most mental health conditions are very treatable and manageable with medical care and support. In celebration of Minority Mental Health Awareness Month, I am honored to spotlight the perseverance of three incredible women. Dior Vargas, 32, is a Latina Feminist Mental Health Activist. Vargas created the People of Color and Mental Illness Photo Project, a response to the invisibility of people of color in the media representation of mental illness. Vargas received The White House Champion of Change for Disability Advocacy Across Generations and tours the country as a mental health advocate and speaker. Her work has been featured on The New York Times, Forbes, Newsweek, and NBC News Latino, to name a few. Vargas also somehow found time to complete a Master of Public Health degree at New York University this year.

Growing up in Spanish Harlem, her family never talked about mental health. Vargas was raised by her grandparents and attended Catholic school. “God and praying, lighting candles was a normal part of my upbringing,” she explains, “Religion was always there as a baseline.”

Vargas recalls the prevalent belief in her childhood that “God is going to take care of it. God will be there.” So when her suicidal ideations began at age eight, no one in her family had any idea. Vargas recalls already feeling like a burden, “I did not want to bother them.”

“It’s the part of treatment that helps me the most. I will always prioritize therapy.”

Her first suicide attempt was made at age 11. Her last one, at age 18, resulted in a stay at a psychiatric hospital where she was treated for severe depression. Later, she would also be diagnosed with anxiety. Witnessing domestic violence and living in poverty severely impacted the way Vargas viewed herself from an early age, but she says, “School was the only escape.”

After receiving treatment, Vargas continued to excel academically. She initially turned her attention to mental health advocacy by sharing her story in 2013 and is now working professionally with an organization to end stigma and discrimination surrounding mental illness in the U.S. She is also looking forward to launching a full publicity campaign for her book based on the People of Color and Mental Illness Photo Project.

Between everything she is balancing, Vargas embraces self-care and ongoing treatment. Though her struggles are ongoing, she has an amazing partner who supports her.

Vargas also stresses the importance of therapy, “It’s the part of treatment that helps me the most,” she continues, “I will always prioritize therapy.” Teresa Woods, 57, is a non-profit professional and doting grandmother of two adorable girls. As one of the most kind and nurturing human beings I’ve ever known, she has supported her family through countless hardships, including struggles with mental health and alcoholism.

Woods’ mother is full Alaskan Aleut. She and her siblings were among the thousands of children who were forcibly removed from their Native American families under the “Kill the Indian, Save the Child” philosophy of mandatory assimilation. Native American parents did not gain the legal right to retain custody of their own children until the Indian Child Welfare Act of 1978.

With this tragic history of trauma, not to mention that of genocide, it is not surprising Native Americans experience serious psychological distress 1.5 more than the general population today. They also experience PTSD more than twice as often as the general population. Though still prevalent, the notion that Native Americans have a genetic abnormality that prohibits them from processing alcohol has been debunked. Turns out, that was a myth all along. Instead, the cause for Native Americans’ highest rates of alcohol-related deaths of all ethnicities in the U.S. can be attributed to several significant risk factors including trauma-related mental health struggles and poverty.

For Woods, family is the key to her happiness. Her wellness routine includes journaling, drumming, and chanting. As a spiritual person, she also burns sage daily. “I love Pow Wows,” she says, explaining that all Pow Wows, in addition to being a community celebration of heritage, are alcohol- and drug- free events. “I always make sure I go,”  she says. CJ Floyd, 24, is the founder and co-host of The Bipolar Bitch podcast and blog, which focuses on mental health and wellness. By day, she is a medical professional at one of the most prestigious hospitals in the country.

Floyd was always a high achiever and graduated high school when she was just 16. She recalls having an insatiable appetite for books and was interested in everything from martial arts to photography. But in twelfth grade, her best friend died by suicide and Floyd began to practice self-harm in order to cope. Several years later, she was diagnosed with bipolar disorder 2.

Floyd says, “There is a stigma in the black community against mental illness. It is often not taken seriously and there is the common advice to ‘pray it away’ or repress it. Yes, a pastor can give you direction but he is not necessarily trained with how to deal with serious mental health issues.”

“So many people don’t want to take advantage of these resources for fear of appearing weak.”

She laments the fact that so many people can be living better, that there is help available even at little to no cost for those who qualify, but, “So many people don’t want to take advantage of these resources for fear of appearing weak.”

“My mom is my rock,” Floyd describes her recovery journey. “She makes sure I take my medicine every day.” Floyd no longer harms herself as a coping mechanism, instead, she thrives on routine and goes to therapy regularly, avoids alcohol, practices mental redirection and yoga.

“My nephews, I have four of them, are my life,” she says and I can hear her grin.

As a happily married 37-year-old mother, practicing positive parenting daily with my preschooler, I have enjoyed successful careers in both the nonprofit and private sectors. My bipolar condition does not define me. My mental health condition has been well managed for nearly two decades. My story and that of Dior Vargas, Teresa Woods, CJ Floyd are not anomalies, but society has many believing they are.

Headlines pelt us daily about teen suicide rates soaring at an unprecedented rate, especially for black youth and for girls. If the current rate of suicide among teenagers is an indication, we are failing to convince our children that their lives will get better and that help is accessible. Stigma and discrimination hurt us and prevents us from moving forward, causing many to suffer in silence. One in five adults in America experiences a mental illness, which means nearly everyone has had firsthand experience or a loved one who has experienced mental health challenges.

By changing the way we talk about mental health, just as these women have, and by removing shame, we can reach those who may be most at risk and those we may not even know are suffering at all.

July is Minority Mental Health Awareness Month. Access to care and rates of prevalence are more problematic in communities of color, including:

Beyond these additional challenges in specific communities, mental health struggles affect everyone in America.

Denial, stigma, and discrimination have proven detrimental. Open dialogue, treatment plans, and prioritizing self-care at all ages is a start to the solution. I belong to an organization of over 150 leaders called The Stability Network whose mission is to inspire and encourage people experiencing mental health challenges to thrive, but all of us hold the power to destigmatize mental illness in our communities.

By changing the way we talk about mental health, just as these women have, and by removing shame, we can reach those who may be most at risk and those we may not even know are suffering at all.

If you or someone you know may be contemplating suicide, call the National Suicide Prevention Lifeline at 1-800-273-8255 or text HOME to 741741 to reach the Crisis Text Line. In emergencies, call 911 or seek care from a local hospital or mental health provider.